Mediation, Vienna Style: A Transformative Week at the CDRC Competition

by Rachel Vicario and Darian Wilkom, Negotiator Team of the University of Buffalo School of Law 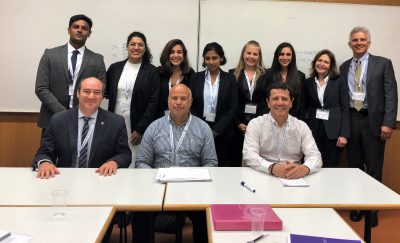 After six months of waiting, three months of preparing, two months of planning, and one week of hyperventilating, we found ourselves in Toronto, boarding our flight and finally bound for Vienna. The fifth annual Consensual Dispute Resolution Centre’s (CDRC) Mediation and Negotiation Competition opened on July 5, 2019 and came to a close on July 11, 2019. The competition, held at the University of Vienna in Austria, is co-sponsored by the International Bar Association and the Vienna International Arbitral Centre.

We are rising third year law students at the University at Buffalo School of Law. We had the honor of representing our University, along with our distinguished coaches, adjunct mediation law professor Steven Sugarman of Pusatier, Sherman, Abbot & Sugarman, and Judith Gerber of the Legal Aid Bureau of Buffalo, at this year’s competition. Not only did we have the opportunity to sharpen our negotiation skills, hone our advocacy skills, and expand our mediation skills, we also found ourselves immersed in a once in a lifetime experience, meeting students, mediators, and attorneys from all over the world.

Before the competition even began, we were inducted into the Vienna CDRC “family.” When we arrived at the Vienna airport, Tom Valenti, an expert assessor from Chicago and distinguished professional in the ADR community, recognized us as competitors and immediately greeted us with warm embrace. The following morning, along with 85 other law students from around the globe, we were formally welcomed by the program director, Claudia Winkler, and her incredible staff. Despite all of our preparation, conversations with past participants, and advice from our coaches, we did not truly appreciate what an enriching and educational experience this would be until we arrived in Vienna.

On the first day of the competition, we attended workshops ranging from topics on cultural diversity to improved advocacy and negotiation skills. We learned not only how to be aware of and sensitive to different cultures, but how to advocate in a variety of situations. We participated in a workshop focused on overcoming cross-cultural diversity, taught by Mauricio Chaves, a mediator from Colombia. He taught us how to overcome language barriers and to strive in every negotiation to be aware of and disregard all biases. He gave an example of someone shaking their head from right to left. Often this movement is considered a sign of disagreement. However, in India, it may convey agreement or simply that the individual is acknowledging and listening to what you are saying. As this was our first international competition, this workshop and this example illustrated the importance of asking clarifying questions to ensure everyone was being understood correctly.

The workshops concluded and we were quickly approaching round one of the negotiations. As we prepared, our nerves set in. It was an intimidating experience to walk into a room for the first time to negotiate with people from a country we had never been exposed to. In hindsight, our fear that the other teams’ version of mediation would be substantially different from the one we learned at UB never materialized. To our surprise, our negotiating styles and understanding of the mediation process were virtually identical.

The CDRC competition focuses on mediation as a facilitative, client-centered process, primarily concerned with drawing out the parties’ interests, allowing them to come to a mutually beneficial agreement. Long before we stepped foot in Vienna, we mastered the details of the competition problem: a ten-million-dollar commercial dispute involving the international sale of frozen horse semen. In an effort to engage in more realistic negotiations, we spent a great deal of time researching the many facets of equestrian sport. The hour before each round was spent learning and preparing to negotiate based upon a set of additional, confidential facts. We completed four 90 minute preliminary rounds against students from all over the world. We were thrilled to advance to the quarter final round, where we competed against an outstanding team from Australia, who advanced to the final round.
At this point, we can say with confidence that those who say the most effective way to learn is by doing are correct. Over the four days of competing, we learned what worked, what didn’t, how to be better negotiators, and how to more effectively advocate for our client. However, what was most valuable was the extensive feedback we received from the expert assessors. After each round, we received thirty minutes of “scheduled feedback.” At times the assessors were critical, but their feedback was honest, constructive, and much appreciated. We will carry their advice through our future mediations, careers as litigators, and everyday negotiations.

The CDRC competition was particularly unique in that in addition to the educational component, the organizers fostered a social environment. It quickly became clear that although this program is a competition, it is first and foremost an experience to learn and grow as students, advocates, and mediators. Many law students routinely participate in competitions where we prepare with our coaches, complete our rounds, hear feedback, and never speak to the assessors again. Vienna was substantially different. After each round concluded, and into the evening, the participants, coaches, organizers, and assessors socialized in unique Viennese venues. Thus, we had the opportunity to network and quite frankly, have fun with everyone involved. It was during these events when we had the pleasure of meeting UB Law School alumnus and expert assessor Judith Ittig from Washington, D.C., an avid supporter of UB’s mediation competition travel program. Some of our favorite memories from the competition are those of us dancing well into the night with all of the CDRC Vienna Family.

Overall, this was an absolutely amazing experience. We are honored to have had the opportunity to represent our school and our country in this event. We will remain forever grateful to the law school’s Advocacy Institute, our alumni, and our coaches who made this event possible for us. We have grown as negotiators, advocates, professionals, and individuals. We will never forget the memories we made, the skills we acquired, and the people we met, not to mention the beautiful sights, incredible food, and plethora of LinkedIn connections. We look forward to returning to the CDRC competition in the future as volunteers and perhaps someday, as coaches.